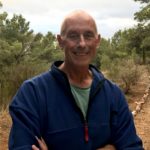 I was ordained at Guhyaloka in 1999, and was immediately struck by the stunning landscape and the mythic dimension of the ’secret valley’. Since 2013 I have returned each year in a land management role. It’s a magical place to live and practice – somewhere I feel very much in my element. My response to the loss of Manjuraja last year has been to spend more time working with the community. I took on the responsibility of the Chair of Guhyaloka in autumn 2020. 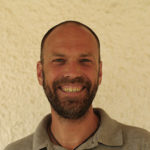 After leaving Brussels in August 2019 to participate in the Dharma Life Course in Adhisthana, I decided to join the community of Guhyaloka in January 2020 in order to work on maintenance of the centre. Guhyaloka is a magnificent and peaceful place which gives me time and space to deepen my practice of the Dharma. 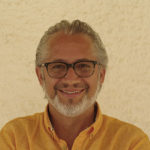 My name is Padmashalin and I was born in Sanare in Venezuela. In 2001 I went to Cambridge, England where I worked at Windhorse Publications for over a decade as Kitchen Manager. I was ordained at Guhyaloka in 2011, currently I am Kitchen Manager here. I support Guhyaloka because I believe it being vital for our Order and to future members of the Order. 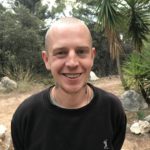 I first got involved with Triratna after doing some basic meditation in a CBT course with the NHS. Then I started going to the Triratna Group in Eastbourne. I became a mitra in 2018 and asked for ordination shortly after. I volunteered at Evolution Arts in Brighton for two years, then in October last year I got a chance to come to Guhyaloka and thought it would be an excellent place to deepen my practice. 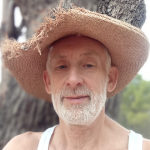 I first visited Guhyaloka in 1986 and loved the place.

After spending many years in Venezuela I joined the community here for a year in 1999. I have done many retreats here and associate this valley with a sense of spiritual renewal.

I arrived back here in Aug 2020 and since then have looked after the almond and olive terraces and other little jobs to help with the general upkeep of our facilities. 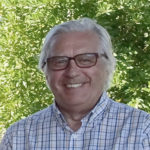 After almost fifty years of teaching and developing Triratna in Europe and the USA, I have ‘retired’ to Uttaraloka to explore the ‘forest life’ and support the facilities for others to join me.

The Guhyaloka Community was founded soon after the purchase of the property in 1986. At first it was a band of volunteers working under a very tight budget and difficult physical conditions to make El Morer and Bhante’s Bungalow habitable, and to build, from scratch, the retreat facilities for the following year’s Ordination Course. It was a deeply challenging time, but the work was completed on time and the first Course went ahead as planned. Since then there has always been a residential support community which is responsible for the maintenance and development of the facilities, including over twenty buildings and 60 hectares (150 acres) of wild forest with some cultivated terraces of almonds and olives. They also service the ordination courses and other retreats, look after those on solitary retreat, providing them with food and other support, and transporting everyone in and out of the valley. Although the hope is to have a minimum of six men living at Guhyaloka there are often only four or five – so it is a fairly demanding life but even so the community members manage to keep up an active spiritual life of meditation and study.

Community members receive full board and lodging and a small stipend to cover personal expenses as well as medical insurance. The nucleus of the community is ‘Bhante’s Bungalow’ which has a kitchen, a sitting room, an outdoor dining space and a couple of rooms for visitors. Nearby, scattered among the pine trees there are a number of wooden huts; one of which is used as the community shrine room and the others are for personal rooms. During the winter, if it is not in use, the community sometimes decamps to the relatively more comfortable accommodations at the retreat centre. The community follows a daily program of meditation, work, and puja as well as eating meals together, and a few meetings in the evenings for study and community business.

Generally speaking the community is made up of members of the Triratna Buddhist Order or men training to join the Order, and for historical reasons English is the primary language. Many of the community members have been from the UK. However since Britain has left the EU we are hoping that we will become much more internationally diverse. Although it is much more difficult now for British men to live at Guhyaloka for longer than three months we are hoping that after a couple of shorter visits we may be able to work towards obtaining full residency. We are presently (Early 2021) looking for two more men – preferably Order members – to join the community.

One of the original components of Sangharakshita’s vision for Guhyaloka was that it would also house a ‘vihara’ – a small community of men dedicated to spiritual practice with no other responsibilities – and over the decades there have been various manifestations of such a community. There has been a variety of personnel and regimens but they have all had a limited lifetime – although often lasting several years. Uttaraloka represents the latest incarnation of this ideal – albeit an ongoing temporary community – that we are calling a ‘forest hermitage and retreat‘.

This is the new page of the Guhyaloka Buddhist Retreat Center in Spain.

Guhyaloka wishes to further engage in eco-responsibility and reduce its carbon footprint.Each airline company invites you to donate a small amount of money to offset the carbon footprint of the flight. We’d like you to donate that money to us to support our efforts to make Guhyaloka as sustainable and eco-friendly as possible. To use the natural ressource we have (a lot of sun, a big forest and a small amount of annual rainfall) as best we can ! Guhyaloka is completly off grid and already we have solar electrics and much of our heating is from wood from the forest.To become more sustainable, we plan to:1- Replace the gas bottles for heating water with solar panels;2- Increase the capacity of the rainwater tank and build a new one to collect rainwater from the Library Hut and Yesso Huts;3- Increase the number of solar panels for our electrical supply;4- Purchase more environmentally friendly cleaning products and recycle where we can.We propose that, rather than giving this airline carbon offset money that you give us 5 or 10£ or more if you wich per flight and we’ll use that money for the above projects. If you make this donation, just ad dit to your retreat payment and let us know how much you are donating to this project. ... See MoreSee Less